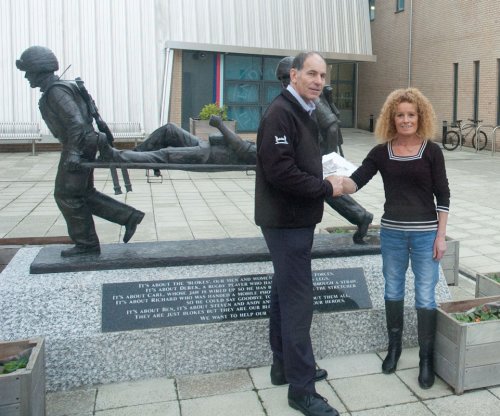 Nicola de Pulford recognised by Women of the Year

Nicola de Pulford will join over 400 women from all walks of life at the Women of the Year Lunch as a '2017 Woman of Achievement’. Each guest is regarded as a ‘Woman of the Year’ and represents not only herself, but the millions of women who make a difference every day.

Nicola is attending in celebration of her work publicising and supporting the work of farmers throughout the UK. She has raised thousands of pounds, first for the Royal Agricultural Benevolent Institution, which supports struggling farmers, and subsequently for Help for Heroes, as well as educational and overseas aid charities.

Nicola who farms near Totnes in South Devon, and is also a professional photographer, was appalled by the hardship caused to farmers by the ban on the import of British beef in 1999 and the Foot and Mouth outbreak two years later. To highlight their plight she published the first Naked Farmers Calendar. It was one of the first of its kind and has remained a best seller ever since.

At the age of 17, Nicola took charge of her mixed family farm in Wiltshire and she has been farming ever since. She is also the joint author and photographer of Behind the Hedge, an illustrated guide to British Farming, published by Sigma Press.

“My whole life has been spent rising early, delivering lambs and generally covered in muck and mud” says Nicola, who has three grown-up children. “It will be a sheer delight to put on a smart dress and enjoy the company of so many remarkable women”

This year’s event will take place on Monday 16 October 2017 at the InterContinental Hotel, Park Lane, London.

Women of the Year has recognised, celebrated and inspired women of all backgrounds since 1955 and continues to shine a light on ordinary women, doing extraordinary work, through an annual Lunch and Awards ceremony, Alumnae events and on-going foundation work.

Sandi Toksvig, President of Women of the Year, said: "I’m looking forward to the honour of welcoming these incredible women to the Lunch in October. These women are making a huge difference in their own way, and it’s important that we celebrate such extraordinary work. I would love to show the room to every schoolgirl growing up in Britain today and tell them ‘you can be whatever you want to be: just look at these incredible women.’”

Exceptional women will receive special awards at the Lunch for being an inspiration to others, demonstrated by their courage, selflessness and dedication. These special Women of the Year Awards are sponsored by Barclays, Good Housekeeping, ITV’s Lorraine and Prudential and will be announced on Monday 16 October 2017.

Previous Women of the Year winners include: