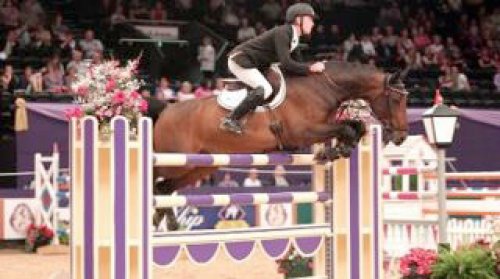 The two countries were tied on eight penalty points after the team competition, sending the event into a shoot-out over a shortened course.

Overnight leaders Saudi Arabia took the bronze with a score of 14 points.

It was Britain's first Olympic showjumping medal since 1984 and their first gold since the Helsinki 1952 Games.

"I've waited 54 years for this so you can certainly say it was a long time coming," said Skelton, who was competing in his sixth Olympic Games.

"I've been to a lot of Games and made a lot of mistakes but I've finally got there. It can't get any better than this.

"I want to thank the crowd, they were behind us all the way and I think without them, this wouldn't have been possible."

A day of high tension came down to a four-rider showdown over eight jumps when Great Britain and the Netherlands could not be separated following two days of competition.

Skelton got Britain off to a flyer with a clear round on Big Star, only to be matched by Dutch rider Jur Vrieling.

Scott Brash and his Dutch counterpart Marc Houtzager both hit a single fence, meaning a clear round from Britain's Charles would seal the gold.

Charles delivered the goods on Vindicat to send the 23,000-strong crowd into raptures.

Great Britain had entered the final day of competition in a four-way tie for second place behind leaders Saudi Arabia after picking up four penalty points in Sunday's first round.

But they were catapulted into provisional first place when Skelton and Brash went clear to thrill the partisan crowd and put Britain in the hunt for gold.

With Canada, the Saudis and the United States dropping out of gold medal contention over a testing 13-obstacle course, it became a straight fight between Britain and the Netherlands.

Britain's last rider Charles could have clinched the gold in regulation competition with a clear round, but he clipped the penultimate fence.

That gave the Netherlands a chance for victory, but when their last rider Gerco Schroder failed to go clear on the appropriately named horse London, the Olympic final was heading for a jump-off.

The atmosphere reached fever pitch when the competition came down to the final rider Charles, whose horse Vindicat had incurred penalties on all three of its previous rounds in the individual and team events.

But under no time pressure, Charles and his mount produced a flawless display, the 52-year-old rider punching the air as he cleared the final hurdle to secure the country's historic gold.

"We are all professionals and I just had to focus on the arena, he said. "I was very keen to get the job done and not let the lads down."

Skelton, Maher and Brash all qualified for Wednesday's individual final but Charles missed the final cut of 35 riders.

Skelton believes another medal is possible with Big Star in such great shape.

"It's another day and another competition but he is in tremendous form and couldn't be jumping any better than what he is," he said.

"Anything can happen - there are a lot of good riders in there and any one of the 35 could win."